“All I can do is feed him and listen.”

I have repeated that sentence like a commandment, a mantra — a helpless prayer — since my younger son moved back home in February. Only 22, he had his heart broken when his longtime girlfriend left him, their apartment and the shared life they had built. They had been together since they were 15 years old.

This past Monday, they would have left for a four-week excursion through Europe, where he had planned to propose. “You will look back on this as one of your life’s most significant losses,” I have told him, acknowledging both the worth of his former girlfriend (whom Nate’s dad and I loved, too) and the depth of his pain. 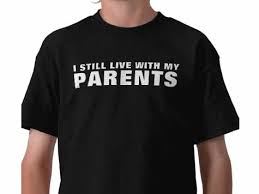 Since Nate moved home, he has graduated from college with honors, increased the hours at his part-time job and gradually built a new circle of friends. He and I have taken long walks and had soul-searching talks. I iron his shirts. He helps pay a few bills.

Repeatedly I have asked myself whether I am helping or enabling him. Truth is, I don’t know. My late mother had Dr. Spock (“and Dr. Penn,” she would say, referring to the general practitioner who delivered her five babies). But I have no guidebook for how to parent a young adult, and neither do my contemporaries.

“I thought I was done, and technically I am done, but you have these concerns,” says the mother of the young man whose sons she is helping raise. Her son left home after high school and did not return until he had a college degree. “I really didn’t think about him on a daily basis,” she says. “Now it’s lying awake till he comes home at night. It means letting go and trusting that he’ll find his way, and that’s hard.”

Helicopter parents? I find that label too dismissive. Instead, Nate and his dad and I are three adults renegotiating the rules in a household that had been an empty nest.

My husband claims I have reverted to “Mom mode” since our son moved home four months ago. I see myself as trying to guide him through the grief and toward a productive life that will help him feel useful and happy.

“Both adult sons and adult daughters reported more tension with their mothers than with their fathers, particularly about personality differences and unsolicited advice,” reads a report about a study of parent and adult child relationships by the University of Michigan Institute for Social Research. “It may be that children feel their mothers make more demands for closeness or that they are generally more intrusive than fathers.”

Since Commencement weekend in May — when my son flew to Portland, Oregon, with his brother rather than face his former partner at their college graduation — I have been thinking not only about what I owe him. I have been pondering what he is teaching me.

As I approach the final third of my life, I want nothing less for my son than I seek for myself: courage, accountability and resilience.

2 thoughts on “‘Emerging’ into a new stage of parenthood”