I wake up early the morning we are to check out of the hotel room. It’s 4:30 a.m., and I feel myself preparing to leave, to return to what we call “real life.”

Facebooking at the White House

This trip to Washington, D.C., is the first vacation my husband and I have taken together since December 2012. We often travel by combining my business trips with a short vacation, which affords us a half-price trip. This time I was attending a four-day conference, during which he stomped the city with his map and sturdy shoes, and afterward we tacked on a few days of sight-seeing together.

In between we had moments — separately and as a couple — when the distance from our daily lives helped us see ourselves more clearly. For me, that is the discipline and the reward of a vacation. I maintain enough of my routine to feel physically healthy and keep pace in the high-strung cities where work trips invariably take me.

But I step back, too. I allow myself the time and space to read, write in my journal and reflect upon a life that, in many ways, is blessed.

Proudly Minnesotan
“Where are you from?” is a common question at a conference. It’s an ice-breaker, a way to forge a quick connection. I used to be embarrassed to mention Minnesota given the indifference I encountered on the East Coast, the lack of curiosity about the Upper Midwest.

These days — likely because I’m more comfortable with who I am — I proudly tell people where I’m from and where I’ve always lived. At this conference for community relations specialists in higher education, I resisted the urge to compete with the woman from Chicago who challenged my labeling of St. Paul as the “Boston of the Midwest” given our number of colleges and our status as the state’s capital.

Chicago is the nation’s second city. St. Paul is the second sibling to its better known Twin City, but I like the relative quiet and the friendly neighborhood feel, and I’m finally to an age where I can acknowledge that.

I felt that pride of place again at the “Reporting Vietnam” exhibition at the Newseum (a worth-the-trip experience for a former journalist) where Eugene McCarthy and Hubert Humphrey were featured as prominently as LBJ and Richard Nixon.

Elsewhere in the museum, a series of comedy clips from “Laugh In” and “Saturday Night Live” about anchors and reporters featured Al Franken from the early ’90s. “That’s one of my state’s senators!” I crowed to the woman sitting next to me. I’m not sure she saw the humor, and maybe it only reinforced her impression of Minnesota as a backwoods state. I didn’t care. 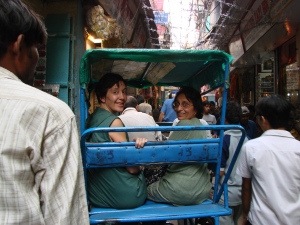 The emotion of traveling hits me more acutely as I age. It’s not that this trip took me out of my Westernized, middle-class comfort zone, as a 16-day journey through India did back in 2006. Instead it was the roller-coaster ride of anticipation, exhilaration, exhaustion, reflection and elation again that had me hyper-alert to my surroundings.

That, in turn, made me nostalgic about my youth and wistful sometimes about what my life is missing and what I hope it still can be.

Back home for a week now, I have settled into the life I sought to escape. Living paycheck to paycheck but grateful for interesting work. Both tired of and devoted to my 15-year-old, food-obsessed dog. Worried for the economic climate my sons are inheriting and proud of them for making their way in it.

Nearly one-fourth of working Americans have no paid vacation or holidays, and those of us who do are often too driven or insecure to take it.

After years as a workaholic, I’ve come to see vacation as a worthwhile investment, a rare chance for a broader view. “All work and no play” not only makes Jack a dull boy; it makes him unaware of customs and cultures beyond his own, and way too invested in the illusion that he’s irreplaceable.