Getting injured tends to make me reflective because it forces me to sit still, which I don’t do well. Even at 62, I value movement and action — to a fault, I am finding as I grow older.

Suffering a dog bite at an off-leash dog park, a juicy and unexpected chomp to my bare left calf, has left me hobbled, bleeding, aching, afraid, exhausted and unable to sustain my usual pace. I sought medical attention, after initially resisting, and two days later succumbed to the first round of rabies shots. 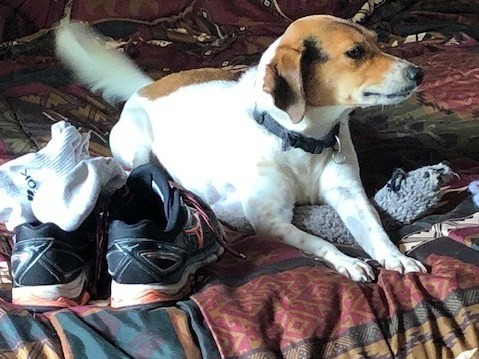 Mia, my beloved Animal Humane Society rescue, gets ready for our morning run.

Here is what I’ve learned from the ordeal:

1. Posting on social media can turn bad luck to good advice: “You should have called Animal Control immediately,” said my experienced older sister, also a dog lover. “They would have impounded and quarantined the dogs.”

Problem is, I was so rattled, calling the authorities did not occur to me. What now? “At this point, I would ask the police to visit the dog owner,” my sister told me a day later. “She needs to be deterred from coming back to the dog park.” Numerous others on Facebook agreed. One even speculated I could be awarded $5,000 to $10,000 per puncture wound through the woman’s homeowner’s insurance. Well, maybe.

2. Trusting people based on superficial qualities leads to speculative results. The first question I asked the woman who insisted her dog only “scratched” me was whether her animal’s shots were up to date. “Of course,” she said. She looked trustworthy. But what does that mean? Turn over that rock, and out slither some stereotypical assumptions.

“Diana,” likely not her real name, was articulate and well dressed. She drove a nice van. She seemed friendly, approaching me later in the park — along with that damn dog! — to see whether I was alright. Again, being rattled and bleeding and in pain, I did not think to say: “Call my cell phone, so I have your number.” Instead, I texted myself the number that she told me, and this apparently trustworthy, friendly looking woman lied.

3. “Tough it out” is an ineffective strategy with an animal bite. Among the advice on Facebook, which I ignored for three days:

Ego can drive these decisions, especially as we get older and want to prove that we’re still strong and healthy. I remember a woman 10 years my senior telling me that she feels more “vulnerable,” physically. Not me! I arrogantly believed I could heal on my own, if I kept the wound covered and kept up my usual pattern of walking 14,000 steps daily. Bad plan, as the nurse practitioner affirmed when she prescribed amoxicillin for my weeping wound.

4. Short-term physical pain is worth long-term peace of mind. Because “Diana” gave me the wrong phone number, because I failed to follow her to her van and photograph the license plate, I had no way to reach her. Therefore, I had no way of proving that her dog had current vaccinations.

A doctor said the risk of rabies was low, given that the apparently cared for dog was at a dog park, not some crazed animal foaming at the mouth, To Kill a Mockingbird–style, that leaped out of the bushes on a jogging path. The Department of Health said otherwise. The only way to ensure I would not get rabies was to get the dreaded rabies shots. “I think the DOH is butt covering,” I told my oldest sister, the pragmatic one. “Maybe so,” she replied, “but rabies is fatal if you get it.” A quick Google search proved that to be true.

And the shots? Not nearly as painful as folklore would have it — or apparently, as invasive as they used to be. When I heard that the initial injections were in the wound, I pictured a doctor plunging a needle straight into the bite site (which remains painful to the touch eight days post-trauma). In fact, the doctor inserted the needles horizontally in the skin next to the wound, on either side, and then energetically rubbed the bite site so it could absorb the serum. That was the worst, and it was over quickly.

Gabby, our rescue puppy from the Standing Rock Indian Reservation in the Dakotas

5. Keep the faith. “Here’s what I know,” wrote a former colleague on Facebook, a man who recently traveled across several states to buy a hunting dog. “There are many, many more bad dog owners than there are bad dogs.” Of course, he’s right.

One woman warned me about PTSD, predicting that I may never be able to return to dog parks. Another offered to connect me with a therapist who specializes in “dog-bite trauma.” I’m not afraid of dogs, which I have owned for most of my life. What I am wary of is lackadaisical dog owners — ones like my neighbor who lets his golden retrievers walk unleashed on city streets, reassuring passersby that the dogs are friendly.

I never intended to sue “Diana.” What I wanted was an apology, an acknowledgment of the pain I suffered and an offer to pay my medical bills. I wanted her to make things right, and she failed me. But I won’t give up on dogs, not today. Not ever. I need their love and loyalty in an increasingly hostile world.